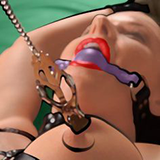 “There is a flaw at the heart of D/s,” I’d often say in the early days of my Dominance/submission explorations with my husband. The flaw, in my mind, lay within the open-ended nature of consent. I felt that if I had a choice to revoke my submission at any time, whether by using a safeword or other means, then it wasn’t really submission, it was just elaborate roleplay. I didn’t want our D/s dynamic to be a roleplay game, I wanted to genuinely submit, and so I repeatedly asked my darling Daddy Dom if he’d be willing to force me if I failed to follow a command. He agreed, and although the occasion of me refusing to sexually submit didn’t come up in those first months, it settled my mind that he would force me if necessary. Which is why the first time I saw the phrase “Consensual Non-Consent” to describe a class at BDSM event, I was excited to have an actual term for our “yes-I-will-force-you” agreement. I was also excited to sign up for the class. I wanted to hear a discussion of the psychological intricacies of surrendering one’s right to consent in D/s. I especially wanted validation of our choice.

To my disappointment, the class was not about being forced to submit, nor about anything non-consensual at all. It was about how to set up a fun scene for rape roleplay. During the class, I raised my hand and asked about my desire to genuinely exist in a space of non-consent. The instructor gave me a list of ways to make rape play feel “more real,” then added that of course the Top in the scene must always respect the safeword and stop all play if invoked. I was confused. Was the desire to not be allowed to safeword my way out of a sexual encounter really so unthinkable, so beyond the pale, that it couldn’t even be discussed?

It was another year before I found a book which explained the distinction between rape play, or “resistance play,” and true consensual non-consent. Finally, the validation I was seeking! But the confusion between the two is now so widespread that a Google search for Consensual Non-Consent primarily turns up advice on how to roleplay rape, while an explanation and rationale for genuine CNC is nearly impossible to find. However, to me, the CNC agreement between my husband and I has been an essential element to the authenticity of our D/s dynamic, and we may have long ago wandered away from D/s without it.

First, a basic definition: Wikipedia declares that Consensual Non-Consent is basically pre-negotiated “blanket consent.” It is a mutual agreement “where comprehensive consent is given in advance, with the intent of it being irrevocable under most circumstances. This often occurs without foreknowledge of the exact actions planned.” In other words, the sub can’t safeword out of compliance with the Dom’s desires.

However, other kinky people, especially those in long-term relationships, are more interested in the rewards — and risks — of genuine power exchange. They want to take advantage of the opportunity presented by an all-encompassing D/s dynamic to create deeper bonds of trust and intimacy. As one blogger writes of CNC, “My response to that loss of control is a positive surrender of all my resistance … I am at a place of total openness, and amazing things can occur when this happens within the bounds of a loving, trusting relationship. The doors swing wide open and the resistance to everything between us just evaporates.”

My answer to that is many-layered. First, abuse is always a possibility between partners, whether straight arrow vanilla or hardcore kinky. The stronger half of any couple (usually male) has it in their power to overwhelm the weaker partner (usually female) at any time, and the fact that women today have power over their sexual will is basically societal roleplay. It is an illusion that can be ripped away at any time, as any rapist or rape victim can tell you. In my mind, CNC recognizes the reality of my powerlessness in the face of my Dom’s superior strength and allows me to get more comfortable in that reality.

Second, it is important to choose one’s Dominant wisely. I would never enter a CNC agreement with someone I don’t know well, or don’t have excellent reasons to trust. I am married to my Dom, someone who has proven over and over that he loves me and cares about my well-being. I know I can trust him to do his utmost not to damage me or hurt me beyond what I can handle. Paradoxically, the more I relinquish control to him, the more our trust grows, and the more control I want to relinquish. The level of trust and intimacy it engenders feels that good, that profound.

Third, because I am a well-trained submissive, we rarely find ourselves in a situation in which he feels compelled to use force. After years of practicing D/s, it is now so ingrained in me to submit, no matter how I feel, that I have almost never say no. That is, after all, the agreement I made with him, and I honor that agreement to the best of my ability. Plus, the D/s dynamic between us feels so essential to me and how my sexuality operates now — and I feel so protected by it, and so peaceful within in — that the thought of doing anything to threaten it makes me want to burst into tears. So, it usually doesn’t matter to me if I feel like doing something or not, I just do it. Occasionally, I may try to whine and wheedle my way out of it, but to my relief, my darling Daddy Dom has become more and more comfortable with insisting, with dominating, and not letting me out of obedience to him. (Unless there is a compelling medical reason, of course.)

Fourth, while I do not have a safeword, if I find myself in distress from a beating or something else that overwhelms, I have several times begged my Dom for mercy. I am careful to cry mercy only when I am truly at the end of my rope. One could call this a pseudo-safeword, and say we are belaboring the semantics, but me begging for mercy doesn’t mean I will automatically get it. A plea for mercy is not an automatic escape. Sometimes, if he is satisfied, my darling Daddy will grant me mercy and stop. Sometimes, if he doesn’t believe I am all the way to my limit, he will tell me, “You can take a little more for Daddy.” He is usually right, and I always feel happy when I can take a little more for him.

Fifth, to be pushed too far is not necessarily an overall negative. I have certainly borne the brunt of a few BDSM “fails” in which I have been hurt beyond what either of us intended, or been overwhelmed to the point of sitting up in the middle of the night, upset and shivering from physical force that my body interpreted as overly-violent. This isn’t fun for either of us, and we have admittedly scared ourselves a few times by triggering a trauma response in me. Yet, once I regain my equilibrium, I am again grateful to him for taking the risk, for demonstrating his power, and I usually feel a good measure awe for him. I find it helpful to my submission to be just a little bit afraid of my Dom and fully understand what he is capable of. And to know we can get through such hard things makes our dynamic feel stronger, more resilient.

In fact, I often find myself wishing there were more occasions in which he would use force, or even push me too far. Because I am normally a “good girl,” automatically obedient, it can feel like the entire weight of maintaining our D/s is on my shoulders, rather than his. I don’t want our dynamic to be a one-way flow of power, me continually surrendering it, but him never taking it. One cannot dominate fully if the submissive is forever perfectly compliant. And one definitely cannot dominate if the submissive decides to withdraw consent. I want the luxury of resisting a command I genuinely have no desire to follow without feeling like I am undermining our D/s. This is another reason why we find Consensual Non-Consent so important to our dynamic. It allows my Dom to demonstrate to me that I can’t take his power away, that it is safe for me to refuse and know that he will assert his authority and “put me in my place” regardless. It allows him to shoulder more of the responsibility for maintaining our dynamic, allows him to put effort into conquering me. And what submissive doesn’t long to be conquered?

CNC can be risky, and not without bumpy consequences. It’s certainly not appropriate for every D/s relationship. But, with strong communication between trusting partners, it can work well, and be remarkably helpful in maintaining authentic power exchange.

One thought on “Consensual Non-Consent: No, It’s Not “Rape Play””